That Damn Elf on the Shelf – (or: Our Transgender Shelf Elf) 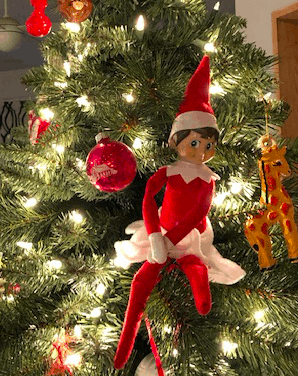 That damn Elf on the Shelf. Just recently we gave in and followed the crowd.

And my kid responded, “We don’t have an elf,” (as matter-of-factly as if he’d said, “we eat cauliflower on Thursdays.”)

Up to that moment, avoiding the damn elf on the shelf nonsense had been a point of pride. Friends were in awe at us having avoided the charade. I thanked my lucky stars as I occasionally scrolled social media documentation of elf creativity I never want to emulate.

But when my kid showed no sense of betrayal or disappointment, I felt all the more guilty that I’d deprived, neglected, abused, manipulated, and robbed his childhood of the true meaning of capitalist Christmas: the damn elf on the shelf.

I pledged then and there I would join the crowd. No longer would my kid need to accept being short-changed by Christmas (corporate) magic.

The next day, I zipped right over to Barnes & Noble. (When was the last time you made that statement. Poor big box under-dog.) It was already December 19th, so elves were in short supply.

I’m sure all of you know that elves come in different genders, skin tone and eye colors. (That was news to me.)

This day all they had were blue-eyed boys. How…ironic? Typical? Dated? Pathetic? Socially irrelevant?

I grabbed a stupid WASPy elf.

And then I noticed the accouterments shelves. AYFKM? There are wardrobes and accessories for these dumb-ass symbols of capitalist excess?

And then I was inspired! I’d get a “girl” set to make our elf at least interesting.

I s’pose I should give you some context for this need to make our elf “interesting”.

I was in the Broadway show, Head Over Heels. Quick explanation of the show: “punk Shakespeare set to the music of the Go-Go’s and smashing the patriarchy.” The plot smashed the hetero-normative paradigm with gender-bending and gay love aplenty. And one of the stars of the show was Peppermint, made famous by her turn on RuPaul’s Drag Race as the first openly transgender contestant. In the show, she played a non-binary character.

Further, my older child is gender-fluid. Our current line in the family is that she has a “boy” body and a “girl” brain. She latched onto this line, herself, after reading I am Jazz, a wonderful picture book about a transgender girl.

So my point is, my 2nd grader and kindergartener are totes woke. They grasp nuances of gender identity and a non-binary world better than 90% of adults.

Back to the damn elf on the shelf.

The next day, walking home from school, I told them to expect a surprise.

We walked into our apartment, and on a shelf right inside our front door is our elf on the shelf.

I am not exaggerating when I say their heads almost exploded.

Even if just for that magical moment, I’m so glad I joined the insanity that is the damn elf on the shelf shenanigans.

Right away, my older kid (while jumping uncontrollably) asked, “What are we gonna name him?”

Younger kid enthusiastically agreed and they started running through names.

They assumed elfie was a he, despite my shelling out for the dumb-ass $20 felt skirt and scarf…accessories I could’ve sewn, myself. And I can’t sew.

So I pointed out, “Well look, kiddos – the elf seems to have short hair.”

“But is also wearing a skirt.”

“I mean – it sort of looks like a boy and is wearing a skirt? Or maybe it’s a girl with short hair?”

The kids pondered and stared for a second.

And then my younger kid – the five year-old who tolerates the insanity of his dads and drama of his gender-fluid older sister – shouts:

Then, my non-binary badass shouts, “It’s name is Trans Ginger Jingle! But just “Ginger” for short.”

With that, I became a disciple of that damn elf on the shelf.