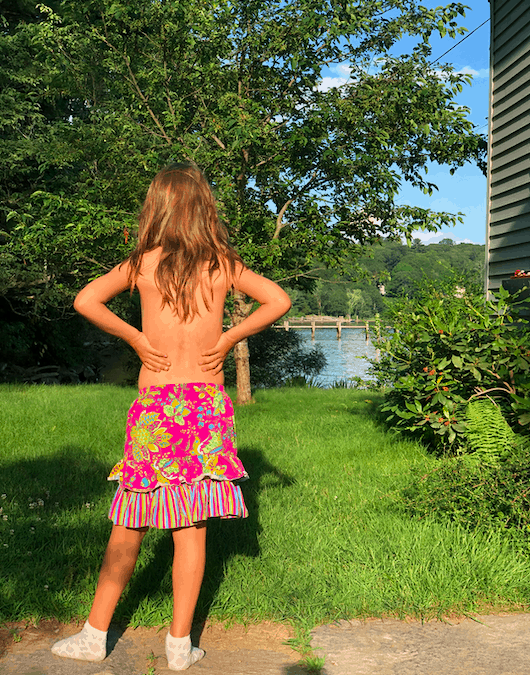 I crossed another Rubicon, with my kid. Ugh. Parenting: it’s hard y’all.

Both my kids were running around in the twilight in blissful imaginary play. They were both wearing dresses (cuz that’s how we roll – and luckily the younger doesn’t mind being occasionally treated like a dress-up doll by his older sibling.)

So there was a lot of squealing and laughing and I noticed a couple times my older kid lifted up her sibling’s dress revealing that he was commando.

(Quick side note – can we all just agree that running around commando in a dress is the way we should all be living regardless our gender expression?)

The younger one laughed but yelled “stop!” and kept running and laughing.

But it happened a few more times, specifically just after I called them in for bedtime. And as they continued squealing and ignoring me and playing “lift the dress”, for some dumbass reason, in that moment, I was furious.

I read the riot act to my older kid about how she was crossing boundaries by exposing her brother’s hiny and this wasn’t ok and “you need to know that you are harassing him and you may be laughing right now don’t you dare laugh in my face about this it is very VERY serious. I know you’re laughing about it all, right now, but he said ‘stop’ and that means you STOP because you can’t go around lifting dresses how would you like it if I went around lifting your dress?”

At which point I did exactly that, exposing her…oh. Underwear.

Welp…that didn’t prove my juvenile eye-for-an-eye point, at all.

She started laughing. And then I wanted to laugh, infuriating  myself all the more, and rather than checking my anger, I channeled my giggles into greater fury.

“You need to realize this could get you in serious trouble. If you lift someone’s dress at school or you do this when you’re older you could go to jail. Yes, JAIL is where you land when you lift up other peoples’ dresses.”

This might have been a bit extreme, but it justified a tad bit of my anger in my pea-brain. Parenting: it’s hard y’all.

Man, I tell ya. I know seven year-olds are supposed to run around saying poop and laughing about butts and shaking wieners. It’s fun and funny. I laugh, too.

I don’t mean for them to keep body parts under wraps. Hell, walk around naked all day long, if you want (at home. Out in public would be a bit too much, obvi. I suppose I would head to jail, then.)

My entire point confession, here, is I was the one who snapped a little too forcefully and I crossed the line I thought I’d avoid for longer than this:

…that my kid started laughing in my face at my fury and that just sent me over the edge.

It’s human, I suppose. And it seems like a rite of passage.

But I felt so stupid, afterward. I tried to talk about it with her, after I’d banished her to her room, but she was buried in a book and just said, “Leave me alone!”

At bedtime, I covered her in kisses and re-visited the topic that it really isn’t ok to expose body parts if someone’s screaming “no”, even if they’re laughing. “The fact is, that’s violating someone’s personal boundaries. Even if it’s your brother.”

But she was quickly like, “Yeah, Daddy, I get it. Stop talking about it.”

Hopefully I haven’t scarred her forever.

But I’m scarred – because of feeling that very first rage at “hell hath no fury like that of a parent being laughed at by the kid they’re trying to lecture”. 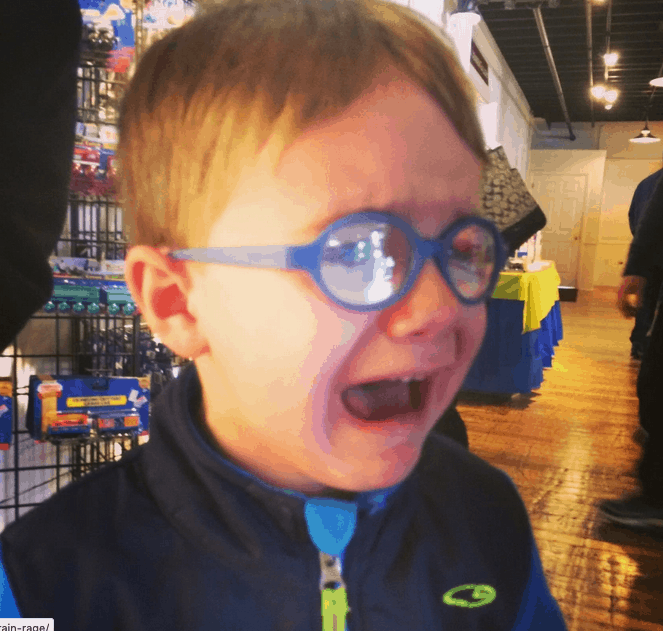 It was our “Day Out With Thomas”, when a rail-riding, full-size “Thomas the Train” visits sleepy train stations with operable train tracks.

In our case, the Essex, CT, train station attaches some coaches to a locomotive, followed by Thomas, and makes a 20-minute trip to the local dump, and then back to the station.

Last year, our trip was idyllic. Ellison bounced along to the songs during the ride, thrilled at hugging a dressed-up “Sir Topham Hat” and riding a jankety fair rides dotting the parking lot.

This year’s day out started out euphorically. For the entirety of our fifteen minute drive, Ellison chanted, “I want to ride Thomas!” The cuteness drove me crazy.

At the station entrance, he skipped and chanted, “I’m so excited to see Thomas! Hooray!”

I love it when he talks like he’s reading a “Dick and Jane” book.

We cheered Thomas’ arrival from the previous trip to the dump.

As we proceeded toward the boarding area, Ellison noticed a table sponsored by PBS displaying swag and a gift basket of Thomas toys.

Ellison walked up and asked, “Can I have that?”

The PBS woman said, “It’s not for sale, sweetie, but your daddy can register to win it. Would you like a PBS pen, instead?”

“No, thank you,” he politely responded…sneeringly.

I gave my spam email and a fake address to the PBS rep woman.

As we turned to board Thomas, I saw tears streaming down Ellison’s face.
“What’s wrong, buddy?” I ask.

“I wanted the Thomas basket.”

You must be kidding. I didn’t expect to be one of those parents with one of those kids crying during this supposedly idyllic day.

I knelt down and said, “Buddy, that basket wasn’t for sale. I’m going to try to win it for you. But now is the exciting part. We’re gonna ride Thomas!”

Ellison whimpered and walked with fogged glasses (which adorably happens every time he cries).

We rode on Thomas for the 20 minutes in each direction to and from the dump. The first five minutes are deafening: kids screaming and parents frantically shouting to smile for pictures. It’s mayhem.

And then the passengers just stare at swamps and the back of dilapidated houses located near the railroad tracks. The return ride is understandably quieter.

After disembarking from the train, I suggested we visit Sir Topham Hat (some poor sot forced to dress in a stifling plush costume.)

I forgot that meant walking through a massive Thomas pop-up toy store.

Ellison’s head almost exploded as we entered the store. He sprinted frantically around the displays grabbing and pointing. None of this happened last year when he had no concept of acquisition.

Apparently capitalism ruined my son over the last year.

I was suddenly re-living my childhood with my mom. During our summer road trips, my number one destination was gift shops. I’d beg her to buy absolutely anything: toys, books, doilies, figurines, ashtrays. Didn’t matter what. Acquisition was the name of my game. I’d hurry us through museums, memorials and monuments to GET TO THE GIFT STORE. I’d present crap as “educational” to help my case. Usually I came up empty-handed. Mom was no impulse buyer.

Eighty-seven years later, I’m watching my son act like the Tasmanian Devil and asking myself, “What would Mom do?”

When I said “no” to the dual train set of “Iron ‘Arry and Iron Bert”, Ellison’s channeled his inner Claire Danes in her 1990’s tearful glory; hands shot into mouth, glasses fogged.

And Thomas enraged me.

During the next few hours of bartering with Ellison, I looked around: were ANY of the other parents having fun? Was I the only adult infuriated with Thomas? Why have I become so bitter?

And then Ellison peed his pants. Again.

Gavin: he’s 3. Give him a break. You need to be better about stopping to make him pee every 30 minutes.

Thomas soured me on any fairs. They’re chock-full of ways to make kids cry.

I should have managed expectations better. Do I say, “You can buy one treat?” I suppose so. But why must I feel obligated to buy something, anyway? Must I check asceticism at the door?

My mom never bought me shit from things like Thomas or county fairs or street fairs or Disneyland. Because of that, I loathed festivals like “Taste of Colorado” or “Lakewood on Parade”. I was a diabetic in a candy store. But I didn’t throw tantrums, cuz I expected nothing. I just wondered why we bothered attending. Mom liked the free concerts. But Julio Iglesias was not interesting to me as a 9-year-old (nor is he now.)

Back to my kids: how on EARTH do you manage DisneyWorld/Land/Hell? Seriously…tell me your secrets.

The day would have been more fun if we’d just gone to a lake and thrown sticks in the water.

We did exactly that later in the afternoon. And it was bliss.

When we sat down for dinner, Ellison was starving and shoveled kale salad and asparagus into his mouth. (I know. Roll your eyes, now.) I asked, “Has it been a good day, Buddy?”

“What was your favorite part?”

“This,” indicating his empty plate of vegetables.