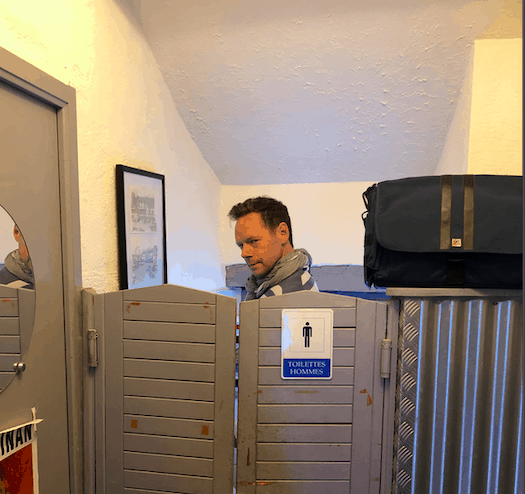 During a recent conversation with parents about potty training kids to poop healthily, a friend of mine stated unequivocally, “Pooping in the ocean is the best.”

Meaning: when they are at the beach, they have no problem just letting a turd slide out and float away.

I thought, “Really? It’s that easy? And don’t you think that, even in the ocean, that’s pretty disgusting and a turd could float next to a child who’s playing in the surf and they could ingest that shit?”

Then again, I get the curiosity…. you’re on a hike on the NaPali Coast of Kauai and there is literally not a soul around you and you’re on a gorgeous beach all to yourself and you might or might not be clothed and you’re like, “Hm. I wonder what it would be like if…”

Not that I would know.

This all makes me think that we, as a society, are far too preoccupied with our bathroom habits. I mean – don’t get me wrong, I don’t want someone else’s poop floating past me. Ever.

But as a parent, I’ve had a lot of poop on my hands; and I survived.

A couple of years ago, I had my kids in France visiting family. We were at a playground and I had with me my own two kids and my niece.

Seconds after our arrival (and certainly after I’d said “before we got to the playground, anyone need to poo?), my older kid approaches saying, “Daddy? I need to go.”

Me: well, go behind the bush.

So I grabbed my kiddo’s hand and we jogged over to public toilets that strike fear into the hearts of Americans – just two foot prints in the middle of a porcelain square with a hole in the middle.  The French call them “Turkish toilets”, which I’m pretty sure is tremendously derogatory and not one that immigrated with the “technology” of a squat-and-hole. Oh, well.)

Luckily, my kid wasn’t remotely fazed. When you gotta go…

So I hiked up her dress and watched as she squatted all the way down (surprisingly easily), one hand holding the dress, one hand paranoiacally on a questionably-dirty porcelain wall. She relaxed and went.

Then I looked around for toilet paper.

None to be round. Zero. Nope. No toilet paper.

Only after this visit to the squat-over-a-hole-and-go did I learn these Turkish toilets are meant to be a clean drop. Even in diarrheal emergencies, it’s how our bodies were designed, you don’t really need to wipe, and it’s how we should be pooping all the time, anyway. The toilet (most likely an invention by European royalty to separate us from the “savages” have resulted in generations of IBS, colon cancer, and hemorrhoids. We really just need to squat in the woods and go, like our ancestors.)

So I’m looking around for toilet paper and see nothing. In desperation, I searched in a trash can to see if there’s something, ANYTHING I can use.

My kid’s yelling at me from the toilet, still hovering.

I’m in a flop sweat frantically searching for anything for wiping.

“Oh, well, I thought. Don’t some societies wipe with their hands and consequently don’t eat with that hand?”

I walk into the toilet and reach over to wipe my kid’s bare ass.

It was completely clean (see aforementioned discussion of clean drops.)

A second sweep for good measure (still nothing), at which point slow-motion set in:

…out of my shirt…

…and straight toward the 4-inch Turkish hole of French poop.

One hand was wiping, the, the other hand steadying myself against the wall, and I’m literally bent over my child who’s squatting under me. The probability of a disaster where I fall on top of her and we both end up sitting in a (remarkably clean) 3’x3’ porcelain basin that catches poop AND pee, was high.

I couldn’t catch my glasses.

They fell out, circled the hole like those quarters–in-a-spiral-thingy at museums, and plopped.

Into my kid’s poop.

And you bet your sweet ass I got my kid safely out of the way and re-robed, and then I figured, “I already have one hand dirty,” and reached into the hold and got my glasses.

They were shitty, for sure, but just a little bit. I washed them at the sink, nearby (that didn’t have paper towels. Because of course it didn’t) and, well…put them back in my pocket.

Fear not – I wasn’t going to wear them, and the shirt needed cleaning, anyway.

That was a lot.

I happened to be at the playground with a friend (a French dad) and I asked him about the toilet paper situation, and he said, “Well, Gavin, that’s why French parents carry this.”

He pulled out Kleenex from his denim jacket.

Mind you, it was summer, hot as balls, and this guy wore a jacket to the playground. Because that’s how you do it in France. Shorts aren’t fashionable – it’s just the Germans who would wear shorts in public (along with their Birkenstocks and socks.) And you bring a jacket. Just in case. Or at least a scarf.

(And mind you – I love French scarf culture. We need to adopt that, America. Do you realize how effective it is just to wear a scarf in the fall and spring? No jacket necessary.)

Seconds later, my younger kid told me he needed to poop.

I exchange a look with French dad friend, he hands me his Kleenex, and away we go.

Second kid also needs to poop badly. And he’s never done a Turkish toilet, either. We run up, he squats, balances, all’s fine, no biggie. Funny how, in the moment, apparently potty training kids to poop healthily won’t stop them from squatting, like this. When you gotta go…

And thank goodness I won’t have to sully my hands, again. Phew.

He poops super fast (partly out of necessity, partly because this is the WAY WE SHOULD BE POOPING, PEOPLE – IN THE SQUAT!) and I’m ready with an (unnecessary) tissue.

I find my balance, bending over his squatting body, reach behind, it’s a clean drop (nothing on the Kleenex) and…

Yes. You guessed it.

My glasses fell out.

Because I’m an idiot and forgot I’d replaced them.

I wash off poop, return them to my pocket, and off we go.

By this point, less squeamishness. I’m a veteran.

But that night I sanitized the shit out of my glasses (pun intended), and tossed the shirt in the laundry.

And it was all fine, and no one had rashes from insufficient wiping and no one got pin worms from sunglasses.

But let’s face it: parenting seriously lowers the bar for excremental evacuation, don’t it?

In the process of potty training kids to poop healthily, we all need to give less of a shit and move on with our lives. 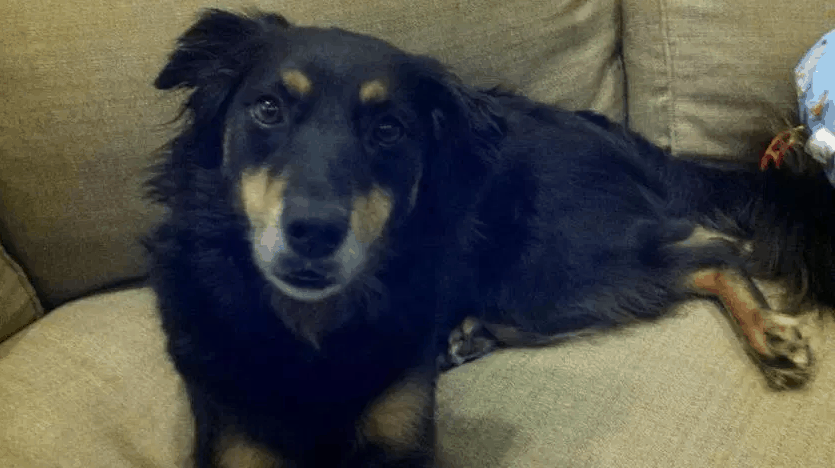 OK, folks – I don’t mean to be all righteous, but seriously: I’m a dog saint…aaaaand…don’t envy me. As evidence, this post is crude but entirely based in fact. Enjoy at your own peril.

My dog, Maddie, is walking and running (more like galumphing), since the beginning of her FCE ordeal. She temporarily lost use of the back half of her body but has made incredible strides back to, well – striding.

And she’s utterly unperturbed when her hips occasionally slip and slam on the ground. She just keeps going in her new normal.

But I desperately hope for to regain control of her bladder and bowels.

Dear doggy lord: my Maddie is walking adequately. I’ll trade further progress in the leg region for any control in her nether regions.

We’ve had to “express” her bladder, otherwise she grows a 3-inch balloon in her gut. We put our fingers behind her ribs and squeeze back and in. This triggers her back legs to shoot straight out while urine sprays out of her with the force of a super-soaker. Not difficult, merely annoying. And a lot of splashing.

But nothing’s as bad as the poop.

Before walking returned, the poor dog soiled herself. Bowels emptied onto her tail and legs and she’d try to drag her paralyzed hind-end away. Daily baths were the norm. (Difficult with a dog who couldn’t stand.) We were all miserable.

Since walking, Maddie still lacks “function” control. Sometimes (usually at about 4AM) it seems she feels something and thinks, “Oh, crap. Oh, no. Oh crap, I think I’m gonna…”

She stands, takes two steps, and then: plop. Another step, another plop. We’ve surrounded her bed with wee-wee pads, so her scat is caught before she scats.

Then she shamefully hides from us in a corner.

The commotion wakes us, but over the past few weeks, we’re resigned to it. “Oh, well. The dog lost it, again.” So we clean doggy-doo by the light of cell phones.

For a month I lined up Ellison’s rubber alphabet tiles down our hallway for Maddie to walk without slipping. Because she stuck to that path, a few times she left presents along the tiles.

One night before turning in, I went to check on the sleeping boys, and I stepped in a pile. I was barefoot.

I slipped, smearing ordure along the P, Q, and R letters, at which point the tiles separated, and my foot further smeared feces on the wood floor.

I semi-sighed/semi-laughed. I wretched as I cleaned.

This wasn’t the first bare foot nastiness. I’m always the one who steps in it.

Imagine, if you will, a grown man squatting behind his dog, squeezing her haunches until her tail pops up and her anus starts to pucker.

At this point, I’m (sadly) happy for action. It means less mess in the apartment. Since it’s now sub-zero in the Northeast, and I squat mere inches away from her, I actually see steam escaping her butt.

The height of indignity is when I force my dog to fart in my face. It happens almost daily.

We hardly react to this, anymore. It’s become de rigueur for the kids.

“Yes. Don’t touch it, please. I’ll clean it after I make your toast.”

One time, a babysitter sat on the couch reading to Ellison when my younger kid delivered something. It was poop.

To this point (knock on wood) Maddie’s had no diarrhea. So clearing the crud is quick and easy and it’s easier for me to say “I’m a dog saint.” Sometimes we scrub with chemicals, sometimes we just wipe with a paper towel. We’re so resigned to it now, we just shrug and keep on keeping on.

I haven’t cleaned with bare hands. That’s probably next.

We ask every visitor if the apartment smells like dog droppings.

I hope they’re not shitting us.