Mom’s Night Off? Not when You’re a Gay Dad

When I first became a dad, I didn’t expect to be forced to out myself as gay, but since everyone assumes you’re straight (understandably) because when you’re on your own with the baby, people ask, “Oh, is it Mom’s night off?”

When my first child was seven weeks old, a friend invited my partner and me to an antique auction in Nowheresville, Connecticut. My first auction. I’m always game for “firsts”.

There were hilarious (shocking) items for sale. Of note was a box of lawn boy/mammy figurines, including a 7-inch Aunt Jemima iron doorstop. Not all of Connecticut is Martha Stewartville.

At the time of serious bidding, when the room hushed and you could cut the tension with a knife, the kiddo got fussy. Of course.

So I walked with my baby bjorn into an adjacent room where a woman sold hot dogs, coffee and cookies.

She had a mullet half way down her back. On her sweatshirt was an airbrushed wolf howling at the moon. It was awesome.

(Not that I’m furthering rural stereotypes, but across the street was a drag racing track.)

She ooh’d and ahh’d over my 7-week-old and marveled at keeping baby quiet. We made small talk about regular baby things: birth weight, sleeping, etc.

Then she asked, “So is this Mom’s night off?”

I kept bouncing, but my eyes went dead. “Um…”

“Or is she just watching the auction?”

Rage boiled within me and I looked at her pointedly. “Mom’s, just…well, she’s just fine.”

Wait, what? “Mom’s just fine”? That was a worse response than Baby’s “I carried a watermelon,” in Dirty Dancing. It lacked any logic, least of all in my emotional response.

I walked away, trying to hide my huff.

She had made a reasonable assumption. Of COURSE she’d assume there was a mom nearby. How often do you see gay fathers with newborns? Not very often. And in rural Connecticut? Even less often.

This is something that happens to a lot of gay fathers. I’ve noticed a lot of sleep-deprived fathers already stressed about the pressure of keeping a newborn alive, who’ve gone on Facebook tirades about the assumptions made by others. I think it might be a gay dad rite-of-passage.

But surprisingly for me, I just hadn’t realized being a father would often force me out of the closet to strangers.

Not that I’m closeted, but straight people don’t have to walk around declaring they sleep with the opposite sex. Why must I walk around outing myself all the time?

Also, a lifetime “proving” my straightness to people makes me jittery about being perceived as gay. I know. It’s my own issue. More on that in another blog. Or not.

I needed to chill out and realize that if she went on some tirade about me being a fag-besmirching-Jesus, so be it. To be a good dad, I need to deal with close-mindedness productively, anyway.

I returned to the kitchen area. She was wary.

I said, “I’m really sorry. I haven’t been asked questions about my son’s mom, yet, and it’s bound to happen. Fact is, my partner and I are raising this little boy and he’s watching the auction, right now. And unfortunately he’s buying a useless phonograph that will undoubtedly collect dust and take up space in our already-cramped house.”

Before I could finish my awkward apology, she reached for my hand and nodded warmly.

“I got it. I got it. Before you said anything, I got it. And that’s wonderful. I’m so happy for you. That’s a wonderful thing you’re doing.”

I bought a hot dog from her. It wasn’t Mom’s night off, but it was a very good night for me. 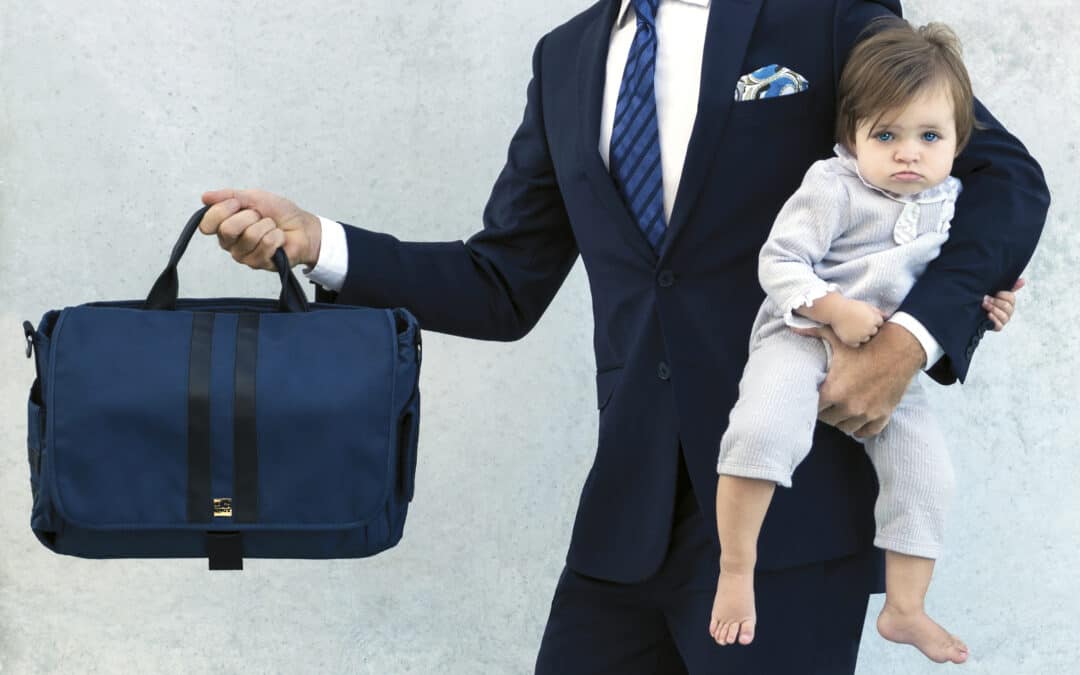 The Best (and/or Coolest) Diaper Bag for Dads

Am I titling this “The Best (and/or Coolest) Diaper Bag for Dads” and including terms like “cool” and “stylish” within the first sentence to maximize my SEO in a way that makes me seem like I know what “maximizing SEO” means?

However, I’m serious – this is the best (and/or coolest) diaper bag for cool dads and stylish dads.

Amanda Kloots thinks so, and she can do like five-minute-long planks:

Additionally, these folks at TTPM? They’re like deadly serious and they think the bag rocks.

So in addition to these highly-scientific endorsements, and the fact that you’re a new parent, there’s no reason you need to compromise your sense of style. It’ll help your entire parenting mojo.

Perhaps you feel like rocking a cowboy hat walking down Madison Avenue? Just own it and love yourself for it.

Or maybe it’s your jam to sport pink platform boots with googley eyes on Main Street, (or in this case 28th Street), then dude: werq it.

And the ECKnox Carryall diaper bag is a bag new dads (and moms!) can rock with confidence and attitude.

However, “ECKnox Carryall diaper bag” – that’s a mouth full, isn’t it? I gotta get my team on that.

Quick sidebar with the team:

When I was expecting my first kid, I wanted a slick, masculine diaper bag that announced, “I’m proud to be a new dad and I want to look good being that dad.” But in all my research, I couldn’t find such a bag.

I thought about it for another year, had another kid, and but still was confounded that such a bag didn’t exist.

So I set out to make it, myself – a bag with sophistication, super functionality, and timeless styling.

Something that made people say, “Wow. Nice bag. I wonder what it is? Oh, wait a minute! That’s that designer diaper bag for dads. Ohhhh…he’s a new dad! Ahhhh.”

And all hearts would melt on the subway/playground/street/hottest-new-brunch-restaurant-in-the-trendiest-neighborhood.

(Lucky for you, I wrote about my journey here and here but also here and moreover here.)

Do I harbor the illusion that men are going to flock to buy bags for themselves? In some cases, yes. But don’t worry, I’m not delusional – this bag is branded for men and marketed to the women who will be 70% of the purchasers.

Why’s this the best (and/or coolest) diaper bag for stylish dads?

This is the best diaper bag for dads because it has 14 pockets.

How can you go wrong? This is also the best diaper bag for dads because two of those pockets are for bottles and it’s REALLY the best diaper bag for dads because one of those bottle holders accommodates a bottle of wine for those particularly tough days on the playground. (Might want to get your own paper bag to protect your assets while drinking in a playground, though.)

This is the best diaper bag for dads because there are frequently no changing stations in men’s rooms.

So I made it the best diaper bag for dads because there’s a zip-open changing station for those times there’s no changing station in the restroom. However, there might be times you can’t be bothered to leave the playground; in which case you wanna show your parenting badassery by changing your kid’s diaper on the playground like a BOSS (who’s not overly freaked out about germs. Because kids are petri dishes. Make peace with the germs. It builds character and resilience and immunity.)

This is the best diaper bag for dads because there’s a padded laptop sleeve.

Not only is there a laptop sleeve that makes this the best (and/or coolest) diaper bag for dads, but there are also three sleeves in which you can stow wallets, phones, pens, sunglasses and those quick-access things you just don’t feel like carrying in your pockets (cuz your ass looks better in your pants when you aren’t carrying bulky things. More on that at another time.)

The best diaper bag for dads has mesh pockets inside the liner so you can organize how you want, but see what’s in the pocket.

The coolest diaper bag for dads would have to be easy to clean, so we made it that way. The liner is removable with a hidden zipper. That way, you can wash the liner and even replace it (INSERT LINK FOR NEW LINERS, HERE. OOPS – however I need first to design and manufacture replaceable liners and THEN insert the link for purchase).

Furthermore, what REALLY makes this the best diaper bag for dads is once the liner is removed, there’s an inner liner that’s slick and black and professional, so you can continue to use the bag for years as a messenger bag after you’re done with the diapering.

You can also quickly convert the bag to a backpack (which many bags can do, but they aren’t the best (and/or coolest) diaper bag for dads.)

Finally (and seriously, y’all…this is my favorite feature) what makes this the best (and/or coolest) diaper bag for dads is the instant access to wet wipes.

Through an interior pocket open with a magnetized flap, you can be friggin’ Oprah on the playground.

There ya have it, folks. The best and coolest diaper bag for dads.

And in no way is this bag just meant for dads. All my girlfriends say “why would you only make this for dads? I’d totally carry this. I never liked my stupid pink, puffy bag!”

Exactly, ladies. You’re invited, too. But I started the company to cater to, well, me.

And I’m an only-child actor. So my needs come first.

Lemme sell a few bags, establish my brand, and bring a ton of other really cool things to market to expand into a lifestyle brand, and then this bag will be all about the gender-nonspecific stylish parenting.

For now? I gotta grow my niche.

It’s an investment that’ll make you feel good inside and out for years to come.

Can any other bag do that for you?

Nope. Because they’re not the best and/or coolest diaper bag for stylish dads.