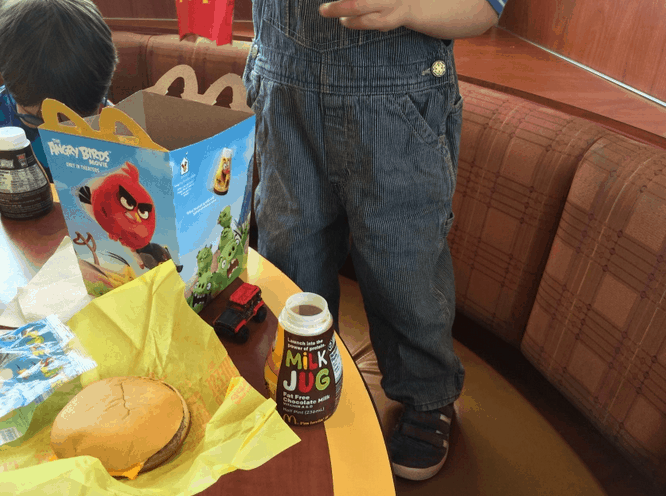 Feeding my Kids at the Happiness

Feeding my kids happiness is one of my highest parenting priorities. Usually that means foods that make me happy. Sometimes it’s theirs. If there was any doubt, let me shuffle-ball-change out of the closet loud and proud: I’m a food snob. I wholeheartedly embrace Michael Pollan’s “Eat food. Not too much. Mostly vegetables.”

When I was the perfect parent (meaning: before kids), I knew fast food would never touch the lips of my precious snowflakes.

Admittedly, it’s easy to avoid fast food living in New York City. You’re never in a car, the kids haven’t fallen asleep in the back, and all food is fast.

But I understand that fast food drive-thrus are a godsend…in desperate situations…international pandemics, zombie armageddon, and heavy thunderstorms. Oh, and when Daddy flirts with jail time during a road trip due to a desperate yearning for “friesandashake” and considers* leaving the kids asleep in the backseat cuz who’s gonna know and you’ll be really fast and besides the dog’s in there with them.

But we all know (don’t we???) that feeding my kids happiness through fast food contributes to the destruction of now-infertile fields from Fargo to Fresno, the dumbing-down of our collective national gastronomic taste for all things over-salted and over-sweetened, trillions of gallons of fertilizer run-off that’s caused the vast oceanic dead-zone known as the Gulf of Mexico, the inhumane treatment of cattle and fowl (and probably fish), the brain-washing of our youth to crave/demand/consume calories exceeding adult dietary needs, and the lowest-common-denominatorization of “family” time.

Anyway, I read Fast Food Nation. I know that there’s shit in our fast food meat. And by “shit”, we mean literal poop.

I saw Super Size Me. (And after seeing it, I craved McD’s fries.)

Having spewed in-eloquently for 300 words, allow me to expose my personal hypocrisy:

Me lovey some fried goodly-goodness.

Caveat being: never in quotidian life, frequently on road trips, and always at the airport. Because according to the Onion Newspaper in some issue that I KNOW I read 87 years ago and still rings true:

“McDonald’s doesn’t count at the airport.” **

So once upon a time I chose to feed my kids happiness in a suburban McDonald’s with a play place and all the features. (In what felt like a small victory in my masochistic love affair with Ronald McD, they don’t know it’s actual name, they just call it “The Happy Meal place”.)

I have no idea how to reconcile my train of thought in the above tangential/parentheticals, let alone my contradictory love for this scion of global dining degradation. My sodium levels are still elevated after feeding my kids happiness at the happy meal place.

My oldest kid opens the Happy Meal and actually says, “What’s in my Happy Meal? Oooooh! A napkin!”

Seriously. She squealed about a fucking napkin.

And my eyes welled.

My two children were so goddamn happy to be at the “Happy Meal place”. They pulled out five items, all gastronomically inedible, from their special boxes with increasing delight. (That there are no less than five “things” to discover – six including a napkin – is all the more thrilling.) Some of the “things” were food, some were toys, all were comprised of a majority plastic ingredients. (Excepting the twice-referenced napkin…perhaps the healthiest option in the box.)

There I was: SuperDad with two beaming children at America’s most hegemonic export. I felt like Tim McGraw and WalMart and Venti lattes all wrapped up in a big Made-in-China-American-flag; a new face of ‘murrica nestled in a plastic booth of sensory overload.

I took a sip of my 32 liter iced coffee containing 483 calories of god-knows-what, to cover the cry-quiver in my chin. Then I removed the bottom bun of my buttermilk-fried-mystery because removing one of the buns makes me feel a teensy bit less guilty, okay? And I took a pre-orgasmic bite.

It was underwhelming. I should’ve just gone for the Quarter Pounder; but somehow chicken seems minutely less naughty. But let’s face it: life is short.

If you’re going to eat at Transfatty McCancer, just super size that shit and get what you want, not what you think might be “better”.

There is no “better” for you in this shack.

Again: I digress. (It must be the insane amount of caffeine still coursing through my engorged belly.)

Feeding my kids happiness at the happy meal place made them insanely full of joy. I completely forgot about the fact that a mere 20 minutes previous, they’d been whining about who had the matchbox car first, one was kicking the back of my seat, and the other would not stop asking me about which princess was my favorite princess.

All thanks to the happy meal place. (Lower case letters intended.) I didn’t want it to end. Except for the fact that I was composing this post in my head, checking my email and might have scrolled HuffPo twice (cuz a lot could happen during a 12-minute degustation), I was completely in the moment. I didn’t even take pictures to document. I just was.

But it was a magical family moment. And in that time, I appreciated McDonald’s for more than just a delectable airport French fry. I loved it for creating something that over-principled foodie snobs can’t appreciate: the delight in breaking bread with children…with delicious bread that can actually kill them.

I didn’t want those 12 (actually, I think it was 9) minutes of familial, convivial, quality time to end.

But then my asshole oldest child just couldn’t get enough. See? Therein lies the problem with this mega-corporation preying on our human addiction to salt and sugar. We just want more, more, more.

Yep, that older child had seen the well-placed pictures of milkshakes and ice cream that exploits illiterate 4 (and 44)-year-olds.

You hear that? No appreciation for the magic I’d already created. She had yet to take one bite of his shit-filled “cheese” “burger”. Just: more, more, more.

(Disclaimer: I totes wanted a shake; and I kinda wanted to buy my daughter’s love via ice cream. Sadly, I justified these hankerings to myself – per usual – by recalling a completely not-science-based report I read in a 2001 edition of GQ stating that McDonald’s vanilla ice cream is “surprisingly good for you”…which is not the same thing AT ALL as saying it’s actually good for you.)***

(Once again…I’ve lost my own train of thought in the midst of my steroidal use of parentheses. Probably from the crack that they sprinkle on those fries cuz: DAMN!)

I responded, “No, buddy, I’m sorry. This is enough treats for today.”

She whined and almost turned on her freakishly over-active water-works.

But then she had a moment of reflection. Perhaps it was the gratitude washing over her as her insides were lubed by peanut oil? Perhaps the musak playing Katy Perry hits reminded her of her first crush: Rosie, the pink train from the Island of Sodor? Whatever it was, she stopped whining. And McD’s climbed an inconceivably higher rung in my estimation.

She looked at me and said, calmly. “Well, Daddy. You said ‘No.’ And that’s mean. And ‘mean’ is what Donald Trump is.”

Wiping away a tear of pride for the political insights my 4yo shared (quite possibly thanks to the modicum of nourishment she received from her Happy Meal apple slices that had been picked, peeled, packaged and preserved but most definitely thanks to the quick discussion we shared in the McD’s parking lot where I saw a Trump bumper sticker on a car at which I scoffed and swore and my son said “What?” and I mumbled to myself “Seriously? In Connecticut? I mean…people are actually supporting that bigoted, inexperienced blow-hard?”), I desperately suppressed the guffaw in my throat, enjoyed another couple of fries, and watched my sons become exponentially uncontrollable as they over-dosed on 10,000 calories of wonderful, delicious crap.

Thank you, McDonald’s. See you, soon when I want to again be feeding my kids happiness.

** Though I can’t find this in a quick Google search. It must have been a statement on the Onion faux newscast. Clearly, it stuck with me.

*** I can’t cite this because seriously: how could anyone actually cite an article in GQ that justifies eating McDonald’s ice cream? Perhaps their “how to give her a 2-hour orgasm” is citable. Even dating back to 2001. But not some “study” of what you should actually eat, nestled between an ad for the first iPod and a salacious spread of Jennifer Lopez flaunting her rocks, pre-imploring us not to be fooled by them.

I follow 5 rules to raise good eaters…or at least pretty good eaters. Oh, we have plenty of negotiating at our dinner tables, don’t be misled. The frequent negotiations, occasional whining, rare tears. But still – it’s tolerable.

But we have mostly avoided eating anxiety and unhealthy habits (not to mention table drama) by following these five rules to raise good eaters.

Mind you – we are very consistent and hyper-annoying to our kids about them. That’s the main thing…like all parenting…consistency. It’s tough being the constant nag, I know. But it pays off.

So… stick with me, dear reader: among a few others feed them this:

…and follow these 5 rules to raise a good eater (with hopefully little drama).

*Absolutely no guarantees, mind you!

Your call. But: no drama, li’l llama. If you don’t want it, you can leave the table. But you’re not sitting here and complaining and pushing food around and whining and negotiating how many more minuscule bites you have to eat. Either eat your dinner or not. (We don’t do clean plate, we require 80%, give or take.) But if you leave the table, no dessert.

A new food that’s scary? You don’t have to eat it all. But if you want dessert, you must have three bites – one to feel, one to taste, one to decide. No negotiations.

If they’ve worn you down and you’re already sipping a cocktail and making dinner, and you KNOW they really are starving, then: fine – let them snack on broccoli or cucumbers or carrots. If they’re REALLY hungry (as opposed to bored) they’ll eat. And they may always gobble all the veggies they want. But no snacking after 4:30.

But especially for food: anytime foods then sometimes foods.

5. Half the plate should be vegetables.

May the culinary gods bless my kids’ doctor for sharing this rule. I get to throw her under the bus as I shrug my shoulders and say to my kids, “Sorry. Not my rule. It was the doctor’s. Half the plate has to be vegetables.” Hell, we almost NEVER make that. But it’s a good thing to aim for. We all know we’d be better off gobbling half a plate of vegetables.

(Oh, here’s an extra tip…but I avoided having an even-numbered list…”5 rules to raise good eaters” sounds better than “6 rules…”, doesn’t it?

Have your kids help in the kitchen.

Ask them/cajole them/require them to give a hand in food prep. It’ll make them more invested in the experience of eating. Let them experiment with using knives. Heck, they gotta learn sometime. Order one of these for young kids, but even so, let them know/understand/respect sharp knives, too.