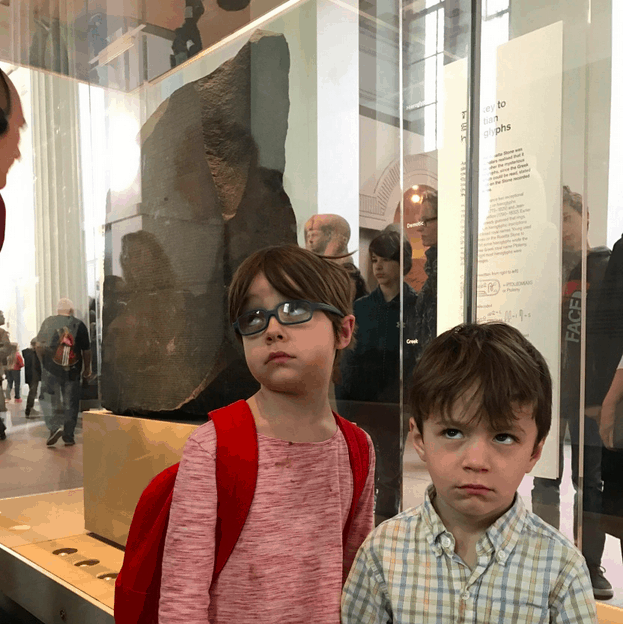 But in my childhood, it could be 6pm and we’d have been in a museum for the previous five hours and my mom would still be reading Every. Single. Panel in Every. Single. Exhibit.

After which, Mom would’ve remembered our AAA guide book’s recommendation and suggested, “Oh, that house where some obscure author slept one time in 1857 is just 16 more blocks away.” So we’d keep going.

But I still wonder – is it worth it?

I feel empowered by walking out of a museum within 90 minutes because, let’s face it…nobody has that kind of attention span. Or hip-flexor strength. Or stamina in their shoulders to hold a backpack of snacks and water bottles and jackets and an iPad (for emergencies) while staring at dinosaurs/paintings/historical dioramas for four hours. (Even when that backpack is the best/coolest diaper bag for dads.)

Except, again: we’re in London. Totally foreign city to me. No clue how to navigate with kids. Ugh. Pray for me – with a charming accent.

“Daddy? Can we go to the cake pop store?” (Read: Starbucks.)

“Are you gonna throw up? No? Then look at that sarcophagus.”

And then, it happened. We stumbled into a room of pilloried splendor that even my kids couldn’t avert their eyes. They were transfixed, they were they were stimulated. My nagging and dragging had been worth it. They were changed beings from near-toddlers to almost-tweens. Such magic a little T&A can do…even for little American, uncultured troglodytes.

Last night, my partner’s brother came over with his sons (ages 16 and 13). They’re great doting cousins.

My kids were excited for their arrival, but when they walked into the house, my older kid promptly veered into “shy kid” land, wanting to “play indoors” and not interact.

And holy cow my older one took that to heart – she said “hello” then disappeared.

I tell myself over and over that I don’t want to push my kids to become slaves to social obligations. I have this revulsion because so much of my upbringing was spent pleasing people around me.

Don’t get me wrong – I’m social and out-going. I love groups of friends and comradery and fellowship.

However, my entire youth was spent feeling the desperate need to be the life of the party and center of the action. My FOMO trampled any self-awareness that could “just being chill and quiet”.

I wanted to please/impress/delight everyone around me, so I pushed myself to be “that guy” All. The. Time.

I came from a family life that always put forward the best, happiest filter. So it just didn’t occur to me that we could be anything but social butterflies.

But what’d I do that evening with my kids and their cousins? Forced socializing.

When my older kid wanted to go inside, I cajoled her into joining the rest of us outside kicking balls and playing chase in the summer twilight.

And I got pissed when she didn’t want to join in.

Granted, she was whining for me, “Daddy! I want you to come inside and play with me!”

Perhaps I was a teensy bit justified. “No, Sweetie. I’m playing outside with family and it’s a gorgeous summer evening. I’m not coming inside.”

(And mind you this wasn’t with random people that might induce shyness…but actual family whom they know and love.)

A good friend of mine inadvertently has given me permission to pump the brakes on forced socializing. Once I invited his family over for a playdate leading to pizza on a Friday evening and he said, “You know what? Fridays our kids usually just melt down and it ends in tears. We’re more likely gonna play it mellow at home.”

(He also pointed out to me that he loathes our school’s “publishing parties” all the adults are crammed in a room frantically pretending to enjoy the classroom party, when in reality it’s just a sweaty fest of parents judging other kids. I’ve given myself permission to loathe these parties, too…or at least to lower my expectations and not force myself into enjoying them, at the very least.)

Am I being a hypocrite? Am I making my kid feel bad for not jumping into horseplay with her older cousins?

Gavin! Remember: you weren’t that, either. Playing sports was not my idea of an idyllic summer evening. (Kick-the-can with neighbor kids was the ideal.)

Forty-five minutes later, she came out of her shell and was intrigued by the baseball game we’d all struck up.

She picked up a bat of her own volition, after I’d long since chilled the hell out.

And she was GOOD! A little slugger.

It just takes her a little time, perhaps.

My take-home from the night? Try try TRY not to pressure your precious child into being instant participants. Let them observe. Let them suss it out. Let them play inside a little bit. Who cares if everyone’s outside? They can do their own thing and make their own decisions about socializing.

But don’t force the comradery to keep up appearances that your kid is – what? Well-adjusted? Smart? Sociable?

How about let them be their own form of well-adjusted?

Don’t force the socializing or the happiness, because that just takes the enjoyment out of it.

Even on gorgeous summer evenings.