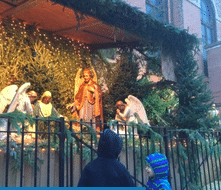 I know – I’m exhausting: I just can’t abide my kids NOT understanding the reason behind any celebration, and so even at Christmas (even though we aren’t regular church-goers), I need my kids to have Santa with a side of Jesus. Or vice-versa. But let’s be honest: our culture focuses MUCH more on Santa than Jesus.