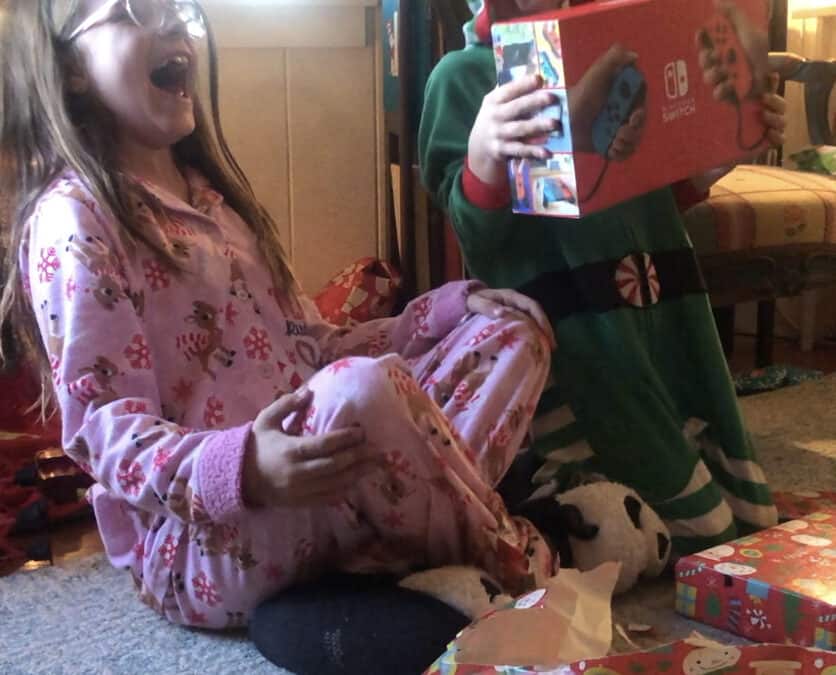 Technology arrived through our chimney, this year, and I question whether Santa ruined my kids forever.

I questioned it before letters were sent to the North Pole or credit cards were swiped. “Should we really be doing this?” I asked my partner. “I feel like we’re definitely crossing the Rubicon.”

When they opened their individualized packages (replete with Santa’s “special” wrapping paper) their ear-piercing, sustained screams were unforgettable: what to their wondering eyes should appear but a Nintendo Switch.

I’m certain they will never forget this.

Christmas morning was filled with the blissful calm of techno-absorption punctuated by child laughter. It was a lovely morning – I was able to read a book for more than four minutes, sip multiple cups of coffee, and watch them not get bored within five minutes of opening their presents.

But I’m just afraid we’ve crossed into a world with less creativity, increased demands for outside stimulation, and higher-priced games requiring plugs and batteries and screen that keep anyone from looking at each other.

Though I begged and pleaded, I never got a Nintendo as a kid. (Truth be told, I’m so old I wasn’t allowed a Nintendo or an Atari.)

Though I felt deprived, I was fine. Consequently, I don’t care about video games – which is a good thing; I’ve got no skill.

So this year, Santa also brought my kids ice skates (purchased from a second-hand kids’ store, because unless they’re actually hockey players, nobody needs to buy new skates, amiright?)

Near our place there’s a marsh maintained in winter as an ice-skating pond. We spent an hour as newbie skaters. Because these were hockey-style skates, the kids were much more adroit at standing straight up. They actually were pretty good, there were lots of laughs and races and falls that miraculously didn’t result in tears.

A few hours later, we allowed another half hour of tech gaming, after which I cajoled us into some old-fashioned gaming. We huddled for our go-to card game, “Avocado Smash.” The kids like it, it’s quick, it’s not mind-numbing for the parents, and usually creates plenty of laughs.

Even if it’s “No! You slapped, last! It’s your pile!” kind of arguments, at least there’s interaction and eye contact.

But it’d been a tiring day. We played one, half-assed round. And they were done.

Later, I kissed them both goodnight and told them, “Today was such a fun day. You got so many awesome gifts. And I loved ice skating with you.”

I wasn’t coaching them to answer, not in the least.

So I asked them, “What was your favorite part of the day?”

“Getting the Nintendo Switch” they both answered.

I know they’ll never forget the ice-skating, either.

Ultimately, I don’t want my kids to be Luddites. I embrace technology. I hope they’ll be programmers and understand how to use technology to enhance their lives and increase their communication with me.

If gaming allows them to do that, so be it.

After two days of technology in the house, we’ve spent more time with less conflict, but we’ve also spent less time looking at each other.

Any suggestions for dealing with tech beyond “setting limits” and “earning screen time”?