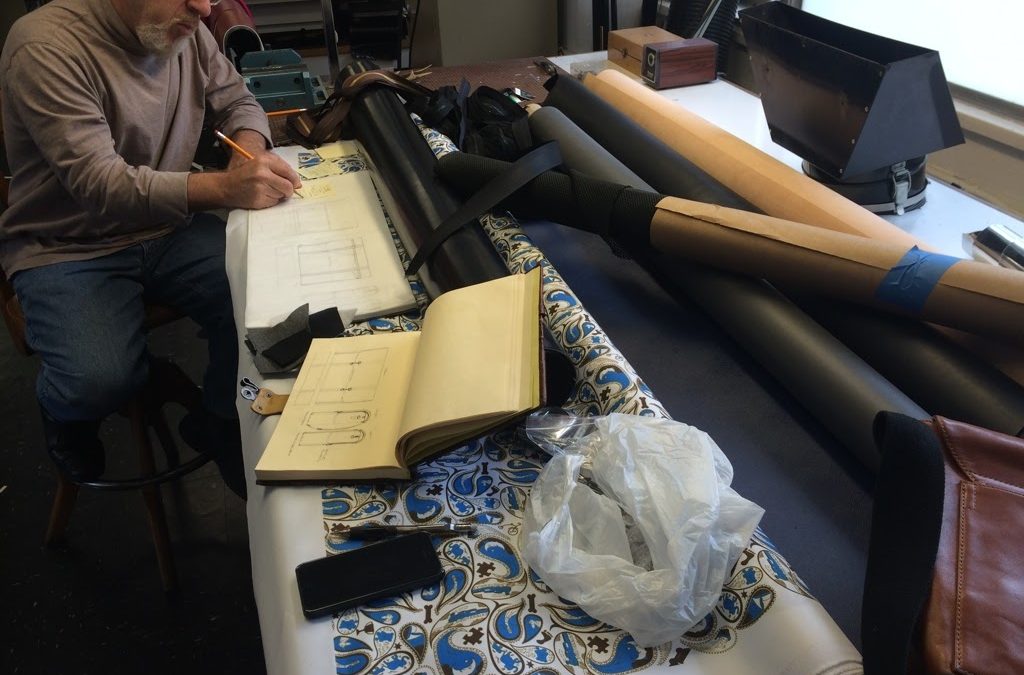 So after harnessing my need to network, it was time for learning the fashion basics. Elliott Gould (I mean Howard) from chapter 3 sent me to the only person he did not know in NYC fashion, but whom he did endorse.

So I called Ben Liberty.

A brief phone conversation revealed a super friendly man who seemed far-from-pretentious when he listed the companies for whom he crafted prototype bags: Gucci, Coach, J.Crew.

Once again, I was talking to a behind-the-scenes fashion mover-and-shaker who voiced full enthusiasm for my project.

Spoiler alert: throughout the entirety of my research and building this company, everyone everyone EVERYONE has been nothing but helpful and enthusiastic. I expected Project Runway attitude and fashion snobbery. Nothing could be further from the truth.

(Well, actually, Howard with the Italian fabrics was condescending and unimpressed, but then again, I didn’t actually tell him what I was making.)

So, in person, Ben ended up being a blue-collar Bostonian with a one-man factory on the far Lower East Side of Manhattan. And all he does is build prototype bags for designers.

“I used to be one of hundreds. But 9/11 destroyed our business. No one could get to us. Everything south of Chambers was closed off for months. We couldn’t do business. That’s why I’m the only one left.”

“And this is my factory. But I like to call it a ‘bag lab’.” It was about 1,000 square feet of leather cutting, piercing, treating machines, rolls of extra fabric, and drafting tables with chemicals and dyes.

It felt like the real deal, though I had no idea what a sham bag factory would feel like.

He ruminated: “So anyway. Men’s fashion – it’s much more interesting than women’s. Women’s is cyclical. It’s all been done. Nothing new. But men are catching on and becoming fashionable. That said, it’s tough. Men’s bags are really, really tough. What’s your idea, again?”

He pondered the ground with arms folded for moment and then said, “Oh,” (dramatic pause) “Now that’s a good idea.”

So we (James and I) chatted about initial design concepts and I told his we were waiting for fabric to arrive from Italy, but “Could you build this bag in the spring?” (At the time it was February.)

“Um…I think so. I mean, I gotta do some work in my getaway house and I think I’m outta town in a few weeks for a client, and then my wife has forced me to take a vacation and then I have some work to accomplish. But my wife keeps track of all that. I think I can.”

He took another dramatic pause.

“BUT, if Mrs. Herrera calls, I drop everything for her.”

Uh-huh. Anyway. Make note of this and add to my list of learning the fashion basics.

“Okay, sounds good. We’ll be in touch as soon as possible, get our fabrics, hardware, lining fabric and the like and we will be in touch.”

James and I walked out. Even though this was a research-based initial interview, I was in love. “He’s the guy. I don’t even care if other people are cheaper or easier or anything. He’s so kind and seems down-to-earth. I wanna use him. But…who was that Japanese-sounding woman he referred to?”

James was aghast and closed his eyes with a smirk. “Somewhere in the world Carolina Herrera just gagged because someone doesn’t know her name.”

We laughed. Hard. But seriously – I’d never heard of this woman. In my defense, she doesn’t do much for men, and even then – she’s way out of my league. But now I recognize her name everywhere.

But I hope somewhere in the world, Ms. Hererra was humbled just a little bit…by an entrepreneur learning about fashion basics.

You’re ok with being humbled as “Jenny from the block”, Carolina, aren’t you?

I set out to round out my cache of fabrics and hardware.