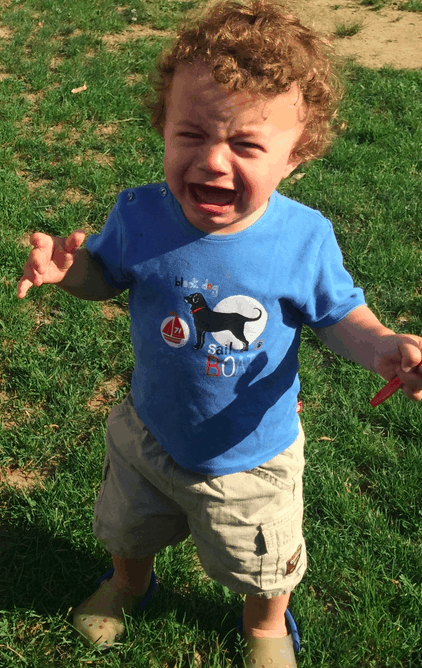 Around 7 months old, it began.

I thought he was frustrated because he wasn’t mobile, yet.

Then he started crawling and the #tearlesscrying followed me around the apartment until I picked him up.

Change of scene helped, but only for a little while. One fall on the playground and the whining started anew. He wasn’t hurt.

Each time I proved my point by picking up the little terrorist. Silence ensued.

Unless he’s in my arms, I’m dealing with whiny kids. (Actually – just kid.)

Nowadays, we’ll have 20 minutes blissful playtime. Then he steps on a train wrong or can’t pick up his humidifier that weighs more than him. #tearlesscrying.

And he won’t stop until I pick him up.

Seriously, people. I’m not cold-hearted. I’m a tree-hugging, vegetarian-wannabe, Libra, for Chrissake. I’m too sensitive to watch reality TV hurts. I am not neglectful.

Recently, Colton had his 18-month wellness visit. The doctor saw that he had a dual ear infection. It wasn’t a bad one. She said it had probably just developed in the previous two days.

But she said, “That’s probably why he’s been fussy.”

“For the past eighteen months?” I retorted

The worst part is, most of the time, in public, all I hear is: “Oh, he’s the cutest, smiliest, happiest baby on the block.”

And my juvenile contempt compels me to say, “Oh, don’t let this little manipulator fool you.”

When Ellison (my 3-year-old) asks, “Why is Colton crying?”, I refrain from responding in the following ways: “Because that’s what he does.” or “Who knows, this time?” or “Because he’s a whiny little shit bent on making our family miserable.”

Ignoring the whining almost never helps. Yet part of my job as a parent is to help him figure out that life is nasty, brutish and short. He might as well start looking for beauty in blocks and trucks and balls and Tina Fey.

If he wastes too much time whining, he’ll find himself living along with cats very soon.

How long will I be dealing with whiny kids? Oh, right. Probably forever.

Recently, while putting Ellison down to sleep, she re-wrote “Old MacDonald Had a Farm”:

I had to repress my guffaw so I wouldn’t wake Colton up.