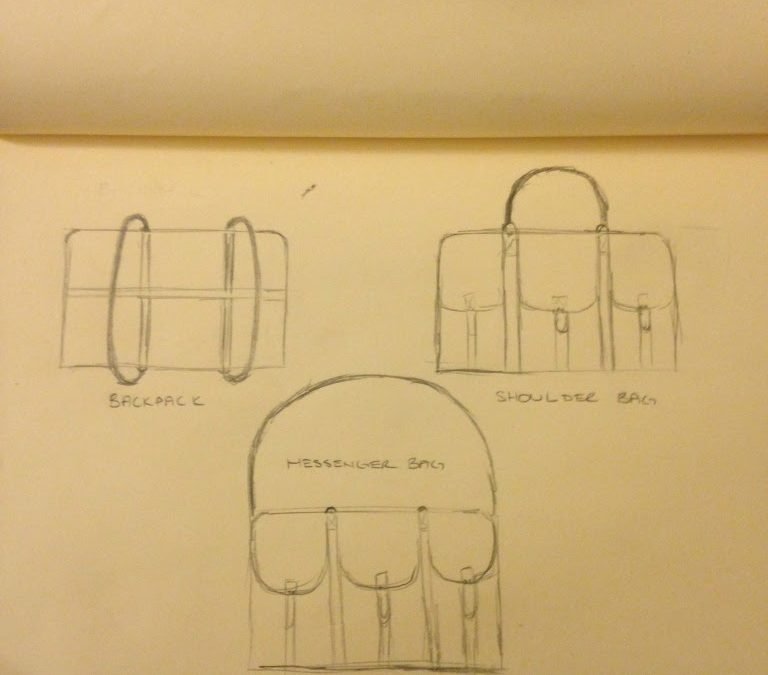 Jumping immediately into the unknown, my instincts said to ask for help because networking is critical to building, well…anything. I called a good friend (also an actor) who had some experience in design, James Brown III. I asked him, “I have a random idea for a design I’d like to ask you about. Can you meet me at the playground where I bring my kids?”

A few days later we met at a playground, aka: my office.

“What do you think of making a stylish diaper bag for dads?”

He didn’t laugh at my idea. Phew. He liked it. (I know. Actors are pathetically in need of positive reinforcement.)

I went on to describe the vision, the need, the inspiration…all while neglecting my kids climbing contraptions ten feet in the air. Oh, well, there’s a fence to keep them penned into the playground. Not having to helicopter their every move was the saving grace of having this conversation.

Later that night, James put together some inspiring ideas and notions of other bags out there. A week later, we met up at a Starbucks and sketched out a basic idea of a messenger bag.

I mentioned, “I’d like the bag to be deep navy blue. Like Louis Vuitton material, but blue.”

Armed with a design, I first reached out to a friend, Mike Lubin, whom I like to call “the unofficial president of an unofficial gay dads club in which I’m only remotely active.”

I texted him a pic of my design and said, “what do you think of a company making baby gear for stylish dads?”

He texted right back: “You should reach out to my friend, Amy Meadow. She’s a fashion consultant.”

Delighted to be pushed forward, but (ever the needy actor) I still had to ask, “But…what do you think of the design?”

He was very complimentary.

Phew. Someone likes me.

That was a pivotal moment in starting up my startup. (The networking, not the compliment.)

Before this moment, I always thought of “networking” as a dirty word. When you’re networking as an actor, it’s basically one-sided and self-serving. “Hi. How will you cast me? What do you think of me? Don’t you think I’m great?”

To succeed at a project, networking is critical.

People want to help. That blew my mind. Along this multi-year path of starting up my startup, every single person has enthusiastically contributed to my path.

And I can’t wait to return the favor. It’s exciting to hear about new ideas and work with people to advance a collective cause of entrepreneurial spirit.

So I call Amy Meadow and give her my quick spiel. As I talked, I could hear her fingers tapping in the background, presumably to Google “baby gear for stylish dads.”

“Ohmigosh, I can’t believe this doesn’t already exist. What a great idea!” she said. “Okay. You don’t need me, right now, you need my friend Julia. She’s a factory sourcer for diaper bags. She will help a lot more. Call me back after a few more steps.”

So I called Julia

Again I hear background keyboard googling. “Ohmigosh. How does this not already exist? OK, you don’t need me, yet. Go talk to my friend, a fabric importer. He can help you pick a fabric and start building.”

Julia gave me a brief breakdown of how to budget and breakdown materials and manufacturing. It was mind-boggling. (To this day, I’ve yet to really break down my company into the parts she originally shared with me.)

I’ll stick with reaching out to the fabric guy.

“He’s the best fabric guy in all of New York. I promise. His products are unparalleled. But,” (dramatic pause) “don’t tell him what you’re doing.”

I was grateful for the words of wisdom.

So I called the fabric guy. Because networking is critical to building, well…anything.

If you’re up for binging, Chapter 3 is right here.